The Newark Market is one of the oldest markets in the UK, originating back in
the 12th century when a charter was granted by Henry 1st. Since then it has
operated continuously, originally on a Sunday but then becoming the first
market in England to operate on a Wednesday. 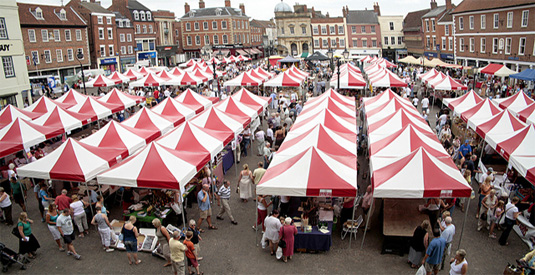 Its Royal Charter was applied in 1549 by King Edward 6th. Situated in possibly
the most attractive Georgian market places in the UK, if not Europe, with a
surround that includes several buildings with significant historic and
architectural merit, the Market has seen it all over the years: famine, drought,
war and celebration. It has hosted births, deaths and marriages, has seen
soldiers off to war with a wave (and a tear) and has welcomed their safe return.
It has also continued to be a key and vibrant trading centre for the region
particularly important for its unique position as the “Gateway to The North” as
well as its excellent road, rail and river links.