L’Amandier Ltd is a unique bakery based in the East Midlands. We craft, make and sell delicious macarons! Crisp outer shells protecting the gooey meringue are sandwiched together with a smooth, flavoured filling of buttercream or ganache. The perfect balance of crisp on the outside with a chewy melt-in-your-mouth centre. Providing a delicate chic treat, as seen in the patisseries and salons de thés of France. We also offer a made-to-order bespoke service, ideal for: 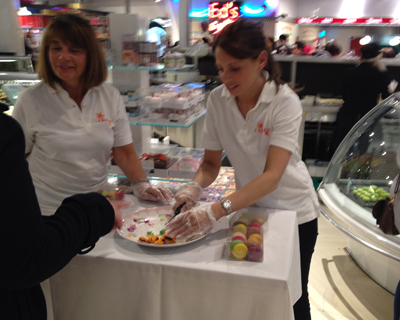 My family has been involved in the food business for generations. My grandfather, was the son of a butcher in London. He went on to own and cook in his hotels in Margate, Llandudno and ultimately Brighton, where he became a highly-respected and sought-after chef and caterer. He was well known in particular for the amazing meals he created and also the sumptuous weddings and banquets he catered in and around the Brighton area, particularly those in the Corn Exchange and the famous Brighton Pavillion.

His son and my uncle, trained as a Master Patissier and went on to create celebration cakes which in their day (1950s and 60’s) were considered to be of the highest quality. Intricacy, detail and exceptional craftsmanship were abundant in all of his creations, which included churches, cathedrals, all with “stained glass windows” as well as musical instruments and open/closed books to name but a few. All this was well before the introduction of the vast array of designer baking aids we have at our disposal today. My mother followed in her father’s footsteps in that cooking and baking became a great love passion, and she still uses the hand-written recipes he passed down to her. She worked for many years as the catering officer for a charitable organisation and carries on family traditions to this day. Her traditional cheesecakes in particular are the best I have ever tasted!

So where do I fit into all this? I myself have come late to this industry!! At Salford University I studied Modern Languages and since leaving taught French, German and Spanish for over 30 years in both Cambridgeshire and Nottinghamshire. My love of languages has taken me all over Europe. Being a food lover and having sampled the delights of French, German and Spanish cuisine I decided to turn to baking after taking early retirement, and for the last 3 years have been working to perfect French patisserie and in particular my obsession – the Macaron.
I decided to name this business L’Amandier, which is French for almond tree, for several reasons. Firstly, the main component of the French Macaron is the almond, and I wanted to retain a French “connection” in the company name to link both the product and my linguistic background. Moreover, I am currently developing other French patisserie products whose main ingredient is the almond.

Secondly, my favourite region of Spain – Granada Province in Andalusia – is also renowned for its almond and olive trees, and the abundance of almond-blossom in many rural areas is a sight to behold. I am moved by this every time I visit and when I retire one day (again!) It will most certainly be to an area of outstanding beauty with the almond tree as the central element.